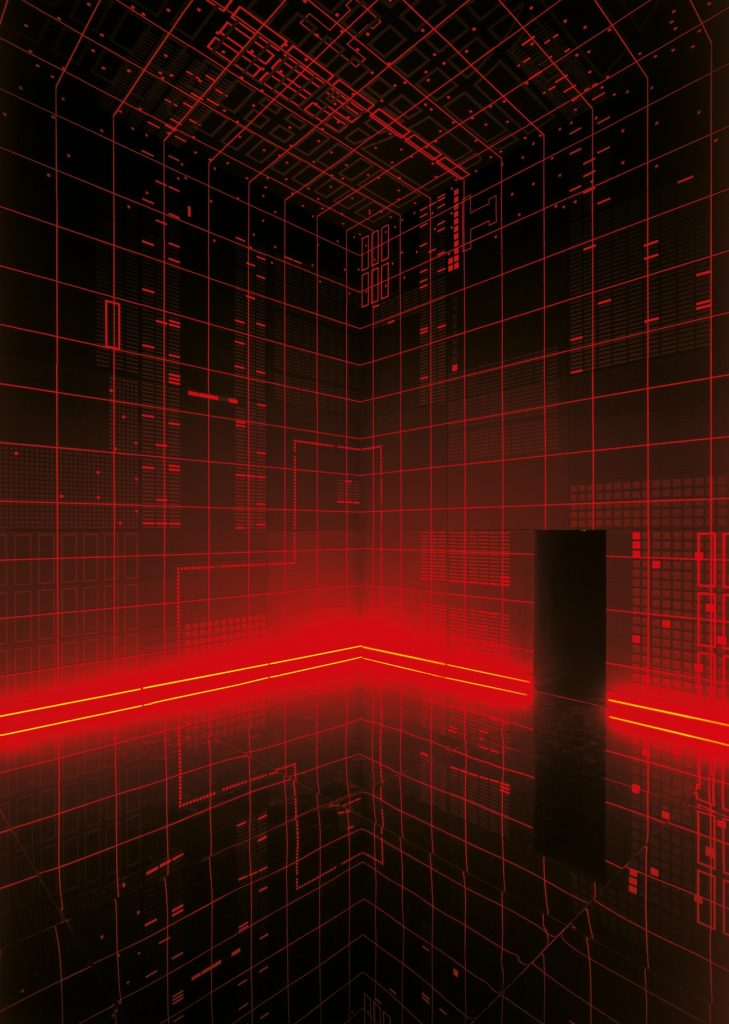 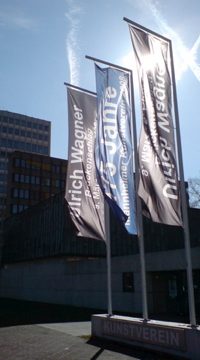 We enter a partly lit room filled with silence. The ceiling and walls reveal luminous red squares, rectangles and lines. The floor can scarcely be distingu

ished―the walls seem to extend ever downwards into infinity―before we realise we are standing on a mirror floor which one can actually walk on. Nevertheless an

d do him an injustice on several counts. As a member of Eduardo Paolozzi’s master class, he started developing semiotic systems in the 1980s that embrace technological artefacts, blueprints and architectural forms. These are fitted into a grid system and mutually interlinked so as to produce complex configurations. 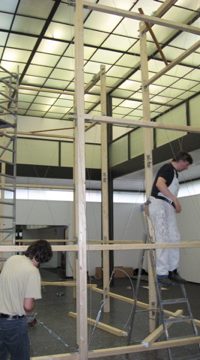 Taking as his point of departure ground plans and street maps that overlap and augment one another, a kind of three-dimensional holographic space is created in the light rooms that allows the graphic elements to hover in the aerial space. The beholder is propelled into a spatial mise-en-scene that envelops her from all sides.

Yet something that is not immediately apparent forms the hub of this sign system. Wagner draws quite explicitly on the aesthetic formulations of abstract concrete art, without however regarding the individual geometrical elements as merely aesthetic interpunction. The architectural shapes which together with their functional connections form the content constitute the other side of his art, which relates openly to the sensual world and its contexts. Nevertheless, the formal aesthetics and rigour of Wagner’s visual cosmos are central features of his work and enter into an inviolable bond with the determined content. This is particularly evident in th

e works, particularly of recent years, that deal with locations connected with German history. Ulrich Wagner has worked for instance the ground plans and site plans of the buildings and block huts at Buchenwald and Auschwitz into concertina books. With their lapidary semioticity, these works recall the extermination of people and humanity in a form that is full of dignity and able to substitute for a memento mori. The horrendous fact that extermination was a planned act is formally nullified here in a personal artistic act, such that dignity is restored to the dead. Joachim Geil has spoken of the “semantic analysis and change” that an act of this kind can achieve.

Apprehension remains, a hesitation to step onto an almost invisible surface that gives the illusion of being groundless. The lines and geometrical boundaries light up like laser projections, present a grid pattern in space that delimits it, while simultaneously opening it up and giving it visual structure. A host of associations team into our minds: have we landed in a virtual space, in George Lucas’ Star Wars? Is this a cybernetic hall of mirrors,a communications room whose linguistic symbolism we fail to understand? Ulrich Wagner’s light rooms pose a mystery to the viewer while at the same time captivating them by an atmosphere of awe-inspiring persistence and abstract signification. But nothing would be more mistaken than to interpret these rooms as places of worship for the cybernetic world and its signs. Wagner’s art is ambiguous and yet pointed. And to pin him down as a representative of some particular kind of abstract concrete art woulIn his piece for the Mannheimer Kunstverein, Ulrich Wagner has brought together a typical map of Mannheim’s city centre―with its absolutist planning―and the plan of the concentration camp of Gurs in southern France, which among other things was the reception camp for Mannheim’s Jewish citizenry when they were deported. In 1940 2,335 people from Mannheim together with many more from all over Baden were taken to Gurs. Many died in the camp, while others arrived through the collaboration of the Vichy regime via intermediate stations at the German extermination camps in the occupied East. Wagner has fused the 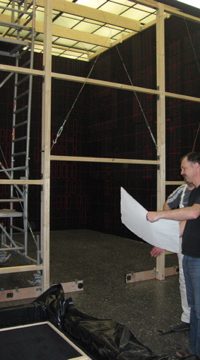 planning of the absolutist city―with the palace at its focal point and an organised municipal architecture that has divided up the districts into squares bearing not street names but alphabetical and numerical designations―with the plan of a concentration camp that served to exterminate human life, or that pave the way for the process. Both are the planned expression of totalitarian outlooks, however different the actual upshot proved to be. Wagner divests these plans of their consequences and reduces them to signs that convey the past, but that in their new form create a dignified detachment. The light room which has been erected inside the square of the exhibition space has also something of the appearance of an Egyptian tomb―full of signs from a language that points to the circumstances of the departed’s life and death, without our being able to read them spontaneously. A room has come into being here which in its own way narrates history and stories, and makes allusions to the past and present which the viewer can experience through the effect created by the place and its signs; this is a space that inspires awe and that remains rooted in our memories through its sheer aesthetic presence and the effects created by the light. The erstwhile ordering principles are dismantled in this work and pieced back together in a new symbolism to create an artwork full of clarity and beauty. While Jochen Kitzbihler’s transparent cube on the Planken in Mannheim lists all of the names of Mannheim’s murdered Jews, Ulrich Wagner’s work remembers in a more anonymous form the structures of power and order that mirror the mental underpinnings of their constructors, while superimposing on them an artistic design that builds on the present and the future. In this way he arrives at a deeper understanding of the fate of those who fell under the wheels of inhumane systems, of the mental and constructed circumstances to which they were subjected, and aims at no less than a new form of aesthetic that attempts to cast semioticity and real conditionality in a single form. 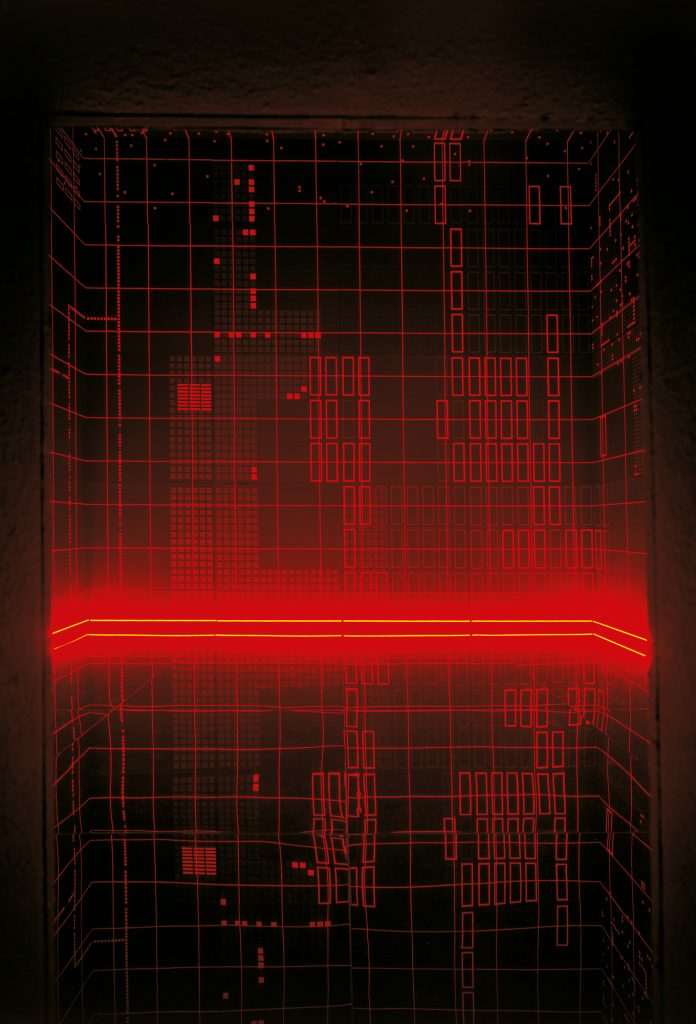 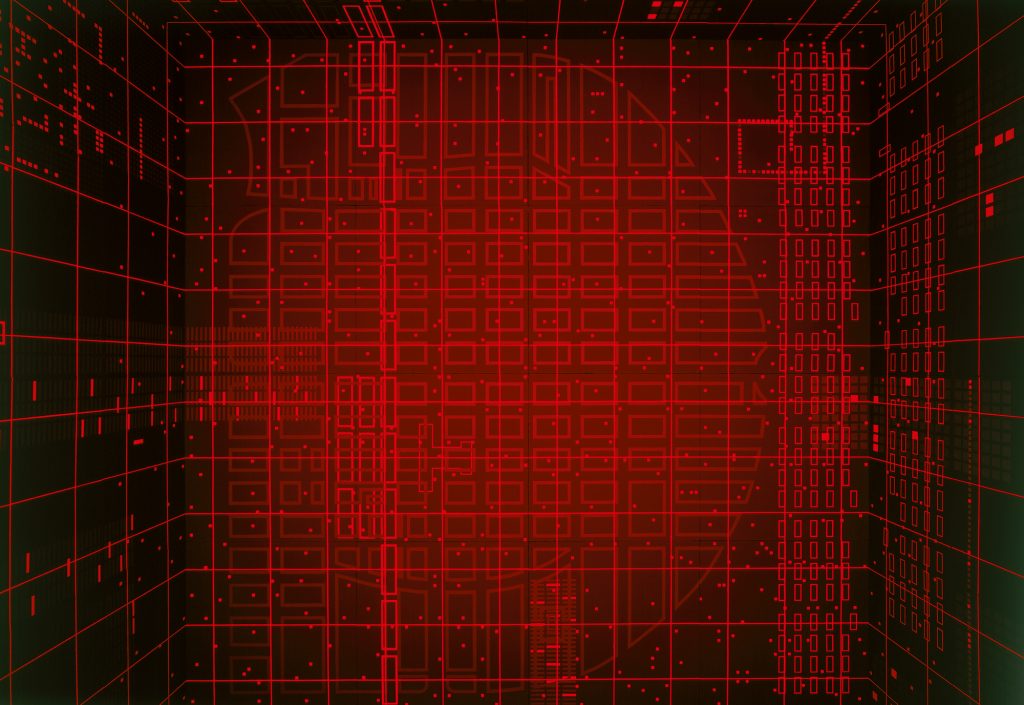